It all started with a Big Bang 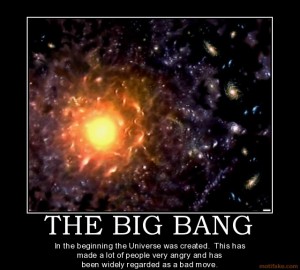 This is the way the world ends.

Well, not the whole world.

This is the way my world ends, then.

You look confused. Let me back up a little.

My name is Billy Bishop, but you may know me as The Big Bang—the world’s most powerful super-powered hero.

Actually, you don’t, although you used to. Don’t worry, I’ll explain that in a bit.

When I got my powers, I thought I’d hit the jackpot. Sure, absorbing all that radiation stung like a son of a bitch. My hair fell out, my skin turned a sickly yellow, and my body burned for months in places you places you literally cannot imagine. But I was alive! The experimental treatment not only got rid of my cancer, but it imbued me with the ability to reshape reality itself. I could alter the chemical composition of molecules with a gesture, rearrange subatomic particles with a glance. I could travel through time and space and other dimensions you’ve never even heard of like crossing the street.

Problem is, I’m not really good with science. Physics makes my head hurt. So instead of, like, bringing water to deserts, or transforming barren regions to produce crops and feed the world, I could barely transmute the turf of my high school football field into a decent strain of pot. (Hey, what do you want? I’m a teenager.)

But one thing I could do was shoot fire from my fingertips! That was fucking cool. So my course was clear. I became The Big Bang and set about fighting crime.

I was so stoked when the League of Heroes came calling. I mean, this is the A-list. I’ve read about their exploits since I was a kid. The Regulator, menacing scourge of the underworld! Bruce Bronze, the two-fisted scientist with the bulletproof copper skin! Analog, the perfect artificial man! Vesper, the seductive sorceress!  And that star-spangled primate, the U.S. Ape!

Oh, man, it was awesome. Doctor Bronze started mentoring me on how to use my powers. The Regulator tried to give me lessons in menacing one-liners. And the U.S. Ape trained me in all kinds of hand-to-hand combat. After several months of training, I was ready to go out in the field.

Or so I thought. Things were pretty shaky, at first, I’m not gonna lie. I almost turned the sky above Washington, D.C., into hydrogen while fighting the Flammable Five (yeah, not good). And then there was the time I accidentally converted half the Amazon Rainforest into gold, triggering a financial and environmental catastrophe. Man, Doctor Bronze bitched me out for weeks.

And the more I screwed up, the worse my control of my powers seemed to get. After I ended up giving Black Lung to a hospital full of terminally ill children while tussling with the Alchemical Brothers, every newspaper, website and cable news show in the country called me a menace. Analog called a team meeting to propose shooting me into the sun. The rest of the League didn’t go along with that idea, thank goodness, although Doctor Bronze did suggest I simply might not be League material, and that I might need to be shipped to somesuper-secret scientific facility in the Arctic Circle for further investigation.

Yeah, things didn’t look so hot. But then I fell in love with an angel.

I mean, really, can you blame me?

No, literally. Her name was Providence, and she was a first lieutenant in the Second Choir of the Seraphim, or something like that. She came to the League of Heroes for help when a cadre of evil angels kidnapped the Almighty and imprisoned him in a trailer park in South Georgia. (It’s a long story.)

Anyway, she was regal, and powerful, and although she was older than time itself, she had a smoking-hot, eternally 19-year-old body that would have made Kate Upton bawl like a baby.

The first time I met her, she was so gorgeous and so divine that, well … I wet myself.  She looked at me like something she’d scraped from the bottom of her flared thigh-high boots.

Analog laughed so hard I think he busted a few circuits. “Smooth move, Ex-Lax,” he crowed, slapping me on the back with the artificial strength of 10 men. Analog could be kind of a dick like that.

But I didn’t care. I was in love. Touched by an angel, if you will. Her presence made me want to do better. To become better in every way. To live up to–nay, to exceed–my potential.

And so I did. I single-handedly stopped the Hollow Men from conjuring the Twilight Kingdom into our reality. I trapped the galactic marauder Heat Death in a black hole. I defeated the Lizard King and his armies, and even held back the godlike Supernals. I was becoming the most powerful being in the universe. I won “Hero of the Month” six months straight. And I swear, even Providence was starting to look at me differently.

And then the end of the world came. And it wasn’t the interdimensional tyrant Thanatopsis, or the Quintessence, or even the Quantum Mechanic who brought about the end of days.

Remember that experimental radiation that gave me my powers? Turns out every time I messed with the fabric of existence, I was infecting it with some kind of radiation poisoning.

That’s right. I gave the universe cancer. Yay, me.

Doctor Bronze gathered the world’s top scientists and started cobbling together some fancy high-tech machines the size of the Sears Tower. Vesper consulted mystic beings from planes I’d never even heard of. Analog? Sat on his artificial ass and didn’t do shit. Asshole.

Anyway, we finally came up with a plan. I don’t really understand it all myself—remember when I said I’m not good with science?—but basically, with the help of technology and magic, my job was to give all of existence the most intense round of chemotherapy ever, from the safety of a tiny pocket of space-time separated from the rest of reality, to contain any radioactive fallout.

The U.S. Ape shook my hand. Doctor Bronze told me how proud he was. The Regulator patted me on the back and said, “Don’t fuck it up.” Providence even gave me a kiss for good luck. On the cheek, sure, but still, I got an erection.

And then they all left, and I opened creation’s hood, channeled all my power, and …

Well, you’ve probably guessed that we won. I mean, you’re alive, listening to me, right? Everything’s back to normal.

As it happens, I ended up rebooting the universe’s operating system. And since I was outside of it at the time, I was written out of its code. As a result, I don’t exist. I mean, I’m here physically. But no one remembers me. I have no family, no home, nothing. Not even my powers—although on the plus side, I can no longer give the universe cancer. So there’s that.

No family, no friends, no powers, no glory and no girl. I saved everyone—I saved everything—and now I have nothing to live for.

This is the way my world ends: No longer a Big Bang. Just a whimper.

With all due apologies to T. S. Eliot.

All characters are the intellectual property of the author.

Tweet
This entry was posted in Comics, Fiction, Geek Alert, The End of the World. Bookmark the permalink.