Or: “Al Stewart, Tenacious D and the beginnings of my freelance writing career”

Tenacious D, the mock-rock duo comprising actors Jack Black and Kyle Gass, announced recently that they’re looking to host Festival Supreme this October, a kind of Lollapalooza of comedy-rock acts that could include such names as Flight of the Conchords, the Lonely Island and even Spinal Tap and Eric Idle (although “It might just be Tenacious D and Weird Al,” as Black concedes).

The concept of such a festival has me ambivalent. I became a fan of Tenacious D through their half-hour HBO episodes somewhere around the turn of the millennium, and eagerly bought the pair’s self-titled album when it came out in 2001. But after a while, I just kind of  … moved on. The joke seemed to have run its course, as the 2006 film Tenacious D and the Pick of Destiny made painfully clear.

Last year’s comeback album Rize of the Fenix has its moments (it helps that the band addresses the Pick of Destiny debacle head-on right away), but it seems to me that most comedy-rock acts have a limited shelf life. The Lonely Island’s output is uneven at best. Flight of the Conchords? Last seen touring New Zealand. Spinal Tap? Does anyone remember Break Like the Wind? Even “Weird Al” Yankovic’s career seems to wax and wane.

Which brings me to the tragic crash-and-burn arc of one of the greatest parody rock bands ever created. Ladies and gentlemen, I give you the brief, untold and unasked-for history of Def Black Riot.

Like all great rock bands, Def Black Riot can trace its genesis to a collision of teenage hormones, boredom and a Saturday night spent playing Dungeons & Dragons at my buddy Styb’s house—not to mention a silver pen and an Al Stewart cassette.

Yes, you read that right: A cassette tape. (I’m older than you. Shut up.) And yes, you also read that other part right: Al Stewart. Mr. “Year of the Cat” himself. 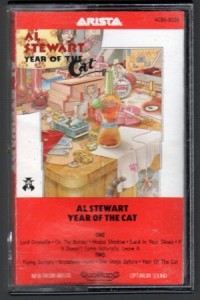 Now, I have no problem with Mr. Stewart’s work, at least the small part of it I’m familiar with. But then, I’ve passed the 40-year-old marker, and one of the things having logged four full decades on this earth affords you is the ability to say “I kind of dig ‘Time Passages’” with impunity. However, the same does not hold true for 16-year-old kids. At least, it didn’t back in my day. For all I know, there’s a whole subculture of young Al Stewart fans loose in the hallways of America’s high schools in 2013, sharing lyrics and historical references from Stewart’s songs, speaking in fake Scottish accents and scrawling the lyrics to “Key Largo” in each other’s yearbooks.

But in the crowd I hung out with, you kept that kind of thing to yourself. Styb may have gotten away with liking Kate Bush and Laurie Anderson, but he was already established as being “cool,” and that granted him the freedom to have more diverse tastes than the rest of us. My friend Larry, on the other hand, was not afforded the same luxuries. (Note: this was the same Larry who taught me the proper title of a certain KISS album.)

So suffice it to say that the discovery of an Al Stewart tape in his possession (right next to Bryan Adams) was an engraved invitation to open mockery and the desecration of his personal property. To wit: the words DEF BLACK RIOT, which Styb scrawled across the cassette case with the aforementioned silver pen.

And this was born … a legend.

Although it was Styb who came up with the name (an amalgamation of Def Leppard, Black Sabbath and Quiet Riot), my friend Tedd and I took the concept and ran with it. In short order, we constructed the band’s lineup, history and discography, as well as the lyrics to some of their many hits. These consisted entirely of parodies of popular hard rock songs, with me channeling lead singer Motley Osborne and Tedd writing in the voice of lead guitarist Stuart “The Iron” Maiden. (Among the other band members in DBR’s checkered history were Dee Purple, Fast Forward Freddie, Hyper Spasms  and the dear, departed duo of Barrow Smythe and Fred Zeppelin.)

The songs were often aggressively silly, immature or just plain weird, simply because it amused us. One of Tedd’s more memorable contributions was “Still Eating Food,” a play on the Scorpions’ putrid ballad “Still Loving You.” I can’t claim the high ground here: Typical of my input were such sophomoric gems as “We’re Not Gonna Break Dance” (from Twisted Sister’s “We’re Not Gonna Take It”) and “You Really Hate Me” (via the Kinks/Van Halen staple “You Really Got Me”).

Clearly, Weird Al had nothing to worry about.

Our crowning glory, to my mind, was an Osborne-Maiden collaboration from the band’s early days. Set to the tune of a Black Sabbath classic, it spun the dark tale of a horde of warrior fruit that decimated everything in its path, until some townfolk doused them with flour laced with radioactive chemicals that turned them into regular old, non-sentient figs. Hence the immortal couplet: “No more war figs have the power/ Dumped in radioactive flour.”

But soon, just dicking around with the lyrics to heavy metal songs wasn’t enough. I decided it was my mission to convince someone—anyone—that Def Black Riot actually existed. And so I submitted a review of their latest album, Metal Childhood, to my high school newspaper, Bear Facts (named for the school mascot, the Bonnabel Bruin).

Although I was never on the newspaper staff, in my senior year I began contributing pieces—without being asked—by slipping them under the newspaper adviser’s door between classes. (I was destined to be a freelance writer from an early age. Years later, I even got paid for it.) Almost all of these unsolicited submissions saw print, among them interviews with Sherlock Holmes and the protagonist of Herman Hesse’s Siddhartha, as well as album reviews both current and not so much (including Meet the Beatles).

Alas, my first attempt to spread the gospel according to Def Black Riot hit a roadblock: Oh, the review ran, but with the words “A Parody” slapped over it.

A lesser soul would have given up, but I was made of sterner stuff. Was it a challenge? Of course. DBR’s lyrics, album titles, even the band members’ names were a compendium of bad puns and nonsense. And the songs themselves often concerned such subject matter as the importance of brushing your teeth (we were way ahead of the Imagination Movers) or, you know, fricking “War Figs.”

What should have been one of my proudest bylines.

Still, I was undeterred. My next submission was a lengthy interview with Motley Osborne himself. In anticipation of the band’s “upcoming concert,” the article delved deep into the group’s convoluted history and explained the thinking behind their latest release, Metal Childhood, a loose concept album built around the naggings, warnings and safety lessons that bombard children from a young age, with such song titles as “Don’t Burp at the Dog.” It also teased some new music the band was working on, including the rebellious anthem “We Rob Mules.” (Trust me, all of this sounded hilarious when we were dreaming up the lyrics. It might be that you had to be there.)

As the photos above and below make clear, I wasn’t yet the smoothest of writers, nor was I the hawk-eyed editor I would later become. (It also bears mentioning that as a professional adult, I make my living making sure that blatant fictions don’t make it into print.) But I digress.

The finished piece was way too long and entirely too enamored of its own cleverness. So I promptly slipped it under the door, as usual, and rubbed my hands together and cackled with glee, anticipating the inevitable “Hey, man, can I borrow one of your Def Black Riot albums?” 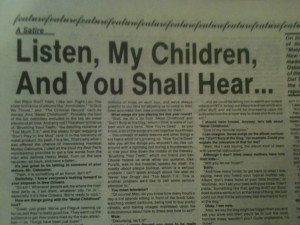 My early attempt at deceiving the masses, outsmarted by an editor.

But it was not to be. Once again, some sharp-eyed editor made sure no one was taken in by my lovingly crafted ruse. This time, the piece was branded “A Satire.” Hmph.

I kind of lost my zeal for Def Black Riot after that. It was clear the Powers That Be at Bear Facts were dead set on blocking me from perpetuating a great rock and roll swindle on the student body of Alfred Bonnabel High School. And besides, in no time I was off to college, where KISS, Iron Maiden and Van Halen were elbowed to the back of the class to make room for the Replacements, R.E.M., Neil Young and the like. Those artists were certainly ripe for lampooning in their own right, but I just didn’t have the enthusiasm for it.

My love of a good, chest-cracking power chord never completely went away, and in time I returned to the hard rock bands of my high school days. And over the years, my tendency to blurt out sophomoric parody lyrics to obscure heavy metal songs has not diminished. Which leads me to think that maybe it’s time to drag Def Black Riot out of the pages of my high school newspaper and into the real world. I’ll recruit players from heavy metal tribute bands, and we’ll don spandex and ripped fishnets, douse ourselves in Aqua Net, and start cranking out the tunes. Goodness knows I’ve got plenty of inspiration for new material, thanks to Foo Fighters, Alice in Chains, the Cult, Soul Asylum, etc., etc. (To say nothing of Nickelback—if parodying Nickelback isn’t, you know, redundant.)

And in tribute to the man who started it all, we’ll close out the night with my long dreamed-of thrash-metal cover of “Year of the Cat.”