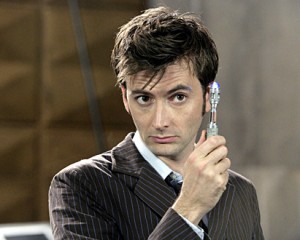 Warning! Things are about to get very geeky. If you’re not into science fiction shows about time-traveling eccentrics, you might want to mosey along to another post.

I don’t consider myself a typical Doctor Who fan, at least not as the bar was set when I first discovered it in junior high. I attended a couple of science-fiction conventions back in the ’80s filled with people dressed up as different variations of its protagonist, the Doctor, which was almost enough to put me off the show before I’d even seen it. (People who dress up in costumes for science-fiction conventions scare me.)

But when I learned that my local PBS station was going to devote its late-Saturday-night hours to a long-running British TV show about a mysterious scientist-type from another planet—who travels through time and space in a machine called the TARDIS, which is forever stuck in the shape of a British police box—I was intrigued.

The show itself (my introduction was via reruns dating back to the mid-1970s) seemed stodgy and slow-moving. But, hey, it had time travel, aliens, killer robots (the Daleks, unfortunately dildo-shaped homicidal machines bent on exterminating all life) and so on. And the Doctor (as he was called) usually had cute female sidekicks. By the time he started running around space and time with a warrior-woman named Leela, whose sole outfit was a leather two-piece, I was hooked.

As I grew older, the show got less exciting—Tom Baker, the fourth actor to play the role of the gallivanting Time Lord (a race of near-immortal beings who can “regenerate” new bodies when they die, allowing different actors to step in), still had a delightfully eccentric and even impish quality, but the plots got more convoluted and less absorbing, the special effects remained amateurish, and the “companions” (as the Doctor’s revolving cast of sidekicks were known) got less comely, until he was hanging out with some teenaged boy who looked like the singer from the Stone Roses. Plus, I was developing a social life that took me out of the house on Saturday nights. So when our local PBS station’s imported reruns got to the point that a new actor (Peter Davison) stepped in to replace Baker, I bailed for good. Tom Baker was the Doctor, to me, and remains my favorite to this day. (You never really get over your first.)

The show fizzled out in 1989, and attempted a comeback with a TV movie in 1996, which I think I watched but can’t for the life of me remember. It was eventually revived in 2005, with Christopher Eccleston in the role. Out of curiosity, I watched the first couple of episodes, and I liked his mix of Baker-ian oddity and Nicolas Cage intensity. (I also liked that he didn’t wear frumpy, colored coats with little question-mark symbols here and there.) I liked that this new series amped up the melodrama considerably. It still had some elements that could charitably be described as “kitschy” (or “cheesy,” if you were feeling less charitable), but I admired its frenetic, almost frantic energy.

So when rumors began circulating awhile back about a big-screen Doctor Who movie—the first since a pair involving Peter Cushing back in the mid-’60s—my imagination kicked into gear (although I admit I was relieved when one rumor involving Johnny Depp turned out to be so much nebula dust). I’ve liked all three of the actors (Eccleston, David Tennant and Matt Smith) who’ve donned the mantle in the new series, but I couldn’t help wondering about what kind of talent a big action-movie budget could attract. Catching up on the final episodes of the most recent season recently, I was reminded of some of those casting thoughts, and now that I’ve got a venue for them, well, lucky you! Here, then, are 10 actors I could see headlining a mega-budget Doctor Who movie—for better or for worse.

1. Robert Downey Jr.: Actually, this is perfect, since Downey’s already proven he’s adept at playing enigmatic, aloof heroes with genius-level IQs in Sherlock Holmes and the Iron Man series. His debauched time-traveler just wants to party at the last days of Sodom and Gomorrah, but ends up in a duel of wits with the Warlord (Daniel Day-Lewis), who seeks to rewrite history by supplying Alexander the Great (Liam Neeson) with futuristic weapons and an army of Cybermen.

2. Daniel Craig: Christopher Nolan directs this brooding sci-fi mind-bender, with the smoldering Doctor and 23rd-century scientist Zela Rhinequist (Rachel McAdams) racing to his home planet to prevent his own birth in an effort to stop his arch-nemesis, the Master (Pierce Brosnan), who’s attempting to delete all of existence. Or is he???

3. Angelina Jolie: The sexiest Doctor ever breaks out the big guns (and finds new uses for the Sonic Screwdriver) as she jumps across time and space to assemble an ancient cosmic weapon to thwart a power-mad race of unstoppable immortals who live on the sun. Seth Rogen is her lovestruck companion, and Charlize Theron the charismatic leader of the Solarans, to whom the Doctor finds herself strangely attracted.

4. Nicolas Cage: Tortured by the memories of friends who died in an intergalactic war with the Daleks, the Doctor seeks solace in the consciousness-altering fermented beverages of Antares XII. Megan Fox is the tentacled bartender who teaches him to love again—just as his new home falls under attack by the Greek gods, on the run from the Daleks, who soon crash the party. Anthony Hopkins guest stars as Zeus.

5. Michael Cera: A freak time-travel accident splits this socially awkward, pigeon-chested Doctor in two, with Russell Brand playing his more aggressive, id-driven half. The Doctor fights a war-hungry galactic president (John Malkovich) while competing with his libidinous doppleganger for the affections of nurse Alex DeGrassi (a sullen Kristen Stewart), who’s busy trying to cure a plague that has turned everyone on the orbital 25th-century space station New Earth into infants—just in time for a visit from space pirates led by John Travolta.

6. Will Smith: When the woman he loves (Scarlett Johansson) dies at the hands of the Weeping Angels, the temporal adventurer travels to the gates of Heaven itself, where he teams up with an embattled God (Morgan Freeman) to stop a coup by rebel angels lead by Javier Bardem. Kevin Spacey guest stars as Satan.

8. Will Ferrell: This wrongheaded reboot stars Ferrell as a low-level flunky at the Toronto Interstellar and Time Travel Institute (T.I.T.T.I.) who pretends to be the organization’s top scientist, Rafael Hu, to impress spunky reporter Rosie Palmer (Elizabeth Banks). Will Arnett plays rival researcher Ernie Stavros, whose experimental robot soldiers—code-named D.A.L.E.K.—develop artificial intelligence and destroy the institute, forcing Ferrell and Banks to jump back in a prototype time machine to set things right. Dwayne “The Rock” Johnson stars as the real “Dr. Hu.”

9. Sam Worthington: James Cameron directs a visually stunning 3-D epic that finds the Doctor tangling with the fearsome Kraken on the deck of the Titanic, and fighting off a race of relentless robot warriors from the future.

Tweet
This entry was posted in Casting Couch, Geek Alert. Bookmark the permalink.