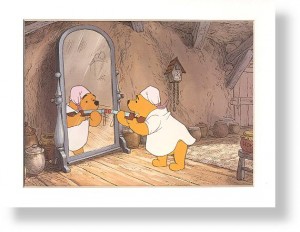 So I’ve seen the trailer for the new computer-animated atrocity that is Yogi Bear, coming to a theater near you this holiday season. Apparently, after the success of Bill Murray selling his soul to give life to the perennially unfunny Garfield, hiring a Saturday Night Live veteran from the ’70s to voice some popular cartoon or comic-strip character in a naked cash-grab is the latest craze. No doubt we’re just days away from an announcement that Chevy Chase will be desecrating the memory of Bugs Bunny in some live-action/CGI hybrid just in time for the end of the world in 2012. What, two Alvin and the Chipmunks stink-bombs weren’t bad enough?

Here’s a little free advice for you Hollywood suits in the audience: If you’re looking to recreate a classic children’s character or story for a modern audience, you’ve got to bring it hard. Just dressing up a familiar cartoon property in computer-animated duds is a waste of everyone’s time. Go for broke. Reinvent the entire concept. Kids today are too plugged in, too savvy and too cynical to give a rip about some fat-ass bear stealing picnic baskets under the nose of an inept forest ranger.

To show you what I’m talking about, here’s a few ideas for modernizing some cherished children’s properties.

In the supernatural thriller Casper, Casper Harvey is a young boy just entering puberty who becomes the victim of a notorious serial killer. Forced to haunt his old stomping grounds as an immaterial shade until he avenges his demise, Casper meets and befriends a sexy young witch named Wendy. With her supernatural help, Casper tracks down his killer, a depraved thrill-killing billionaire bad boy named Richie Rich.

But before he can exact his revenge, Casper watches helplessly as Wendy, for whom he’s developed strange feelings, falls under the sway of a smooth-talking little demon named Hot Stuff. Can he keep Wendy from falling for this handsome devil’s seductive spell? And can he uncover the mysterious connection between Hot Stuff and Richie Rich before Wendy becomes the killer’s next victim?

The series traces the manipulations, alliances and double-crosses between Archie, his best friend and drug supplier Jughead Jones, Veronica, and spoiled rich boy Reggie Mantle. Veronica hires local stripper Cheryl Blossom to blackmail school principal Waldo Weatherbee. Reggie attempts to seduce Betty in order to get into bed with Veronica, who will stop at nothing to destroy her innocent rival for Archie’s affections.

And when Pop Tate refuses to give in to Jughead’s extortion demands, the junior crime lord orders his enforcer, Moose Mason, to blow up Pop’s business, local hangout the Chok’lit Shoppe—and Archie and Betty are caught in the explosion.

In the first-season finale, Archie befriends genius nerd Dilton Doiley, and uses him to unleash an airborne virus that brings Riverdale to its knees in retaliation. Meanwhile, Reggie leaks Archie and Veronica’s sex tape on the Internet, forcing Hiram Lodge to call upon his top-secret Pentagon contacts to eradicate Archie once and for all.

Winnie the Po-Po is a hardened cop in the Hundred Acre Hood, one eye on retirement and the other on landing a big score to finance his out-of-control honey addiction. While breaking in his new partner, a fresh-faced rookie named Piglet, Win (as everyone calls him) comes across the body of his most trusted criminal informant, a sad-sack street hustler named Eeyore. His superiors on the force are working hard to make it look like a suicide; everyone knows Eeyore was a manic depressive addicted to Effexor.

But Win suspects otherwise, and in the course of investigating his friend’s savage death he crosses paths with the psychotic Tigga, whose stranglehold on the drug trade in the Hood is threatened by his fondness for sampling his own product—and by an Australian newcomer named Kanga and her murderous progeny, Roo. As he attempts to navigate this escalating drug war, Win uncovers a conspiracy within the department that leads all the way to the top—the mayor of Hundred Acre Hood, a twisted sadist with a short-pants fetish named Christopher Robin.

Tweet
This entry was posted in Movies. Bookmark the permalink.

One Response to Mission: Improbable