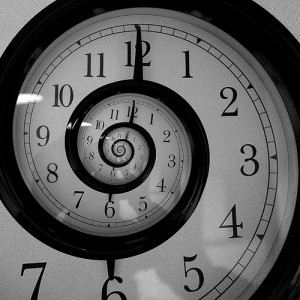 When last we left our intrepid would-be time traveler, he—that is, I—was reuniting with his/my childhood friends Jason and Keith, who had come to Atlanta for a Rush concert on the band’s 2010 “Time Machine Tour.” Jason and I hadn’t missed a Rush tour since Grace Under Pressure in 1984, despite living 500 miles apart for the last nine years; I hadn’t seen Keith, who currently resides in New Mexico, since his father’s funeral here in Atlanta six years earlier. We now rejoin the author’s thoughts on the experience, already in progress:

Maybe it had something to do with my recent yearnings for a temporal do-over, but I really loved the visual motif tying into the “Time Machine” theme. The steampunk-inspired stage set (from the old-fashioned video screens built into Alex Lifeson’s amplifier cabinet down to the pipes releasing bursts of steam in place of pyrotechnics) was genius, complemented with such retro-futuristic touches as clanking gears and the onscreen odometer that occasionally scrolled back to the year a particular song was released.

What I enjoyed more than any of that, though, was catching up with Jason and Keith afterwards. Our first stop involved rolling into a popular Atlanta “gentlemen’s club” at 1:30 in the morning, a proposition that usually fills me with only slightly less trepidation than the idea of a Rush convention. Both, after all, combine something I like a lot (Rush, in one corner, and naked women in the other) with something I don’t: the phenomenon of a mass of people getting together to worship other human beings, or the collision of sexuality, manipulation and avarice. I’m confident that Keith, Jason and I are smart and secure enough to enjoy the illusion such places sell without succumbing to the uglier impulses displayed by both sexes. We’re not assholes to the young women who work at such places, nor are we susceptible enough to believe that their wide-eyed interest in what we have to say extends any further than the paper and plastic currency in our pockets—or their whispered promises of “anything goes” in the VIP rooms.

Turns out Jason and I disagree (surprise, surprise!) about this particular establishment—just as we disagree about politics, sports, the Eagles and many other topics. Jason likes this particular spot (which shall remain nameless) because of its dive-y atmosphere and because he feels the girls there “don’t take themselves too seriously” and are “in on the joke.”

Maybe that’s true for him. He’s certainly far more outgoing and chatty than I am, and girls in these types of places tend to flock to him (the fact that his appearance fairly screams “middle-aged dude with money—he dresses in expensive-looking clothes and wears a pricey Rolex—might have something to do with that). On a previous visit, a dancer about our age gravitated to him, and they spent hours gabbing about Constitutional law, serial killers and other minutia before the topic of table dances was even broached. Jason just puts people at ease (well, except Democrats), whereas my tendency to just be quiet and watch, born mostly of social awkwardness, tends to seem aloof and/or creepy.

In any case, my experience is different from Jason’s, mainly because while he’s spending the entire night talking with his new best friend, I’m being repeatedly and aggressively pitched on the merits of the V.I.P. room. I’m also watching a dancer mouth the lyrics to Pink’s “U + Ur Hand” as they dance, emphasizing the line “Keep your drink, just give me the money” and even making eye contact with males in the audience as she does so … which would seem to be counter-intuitive if your goal is to seem available and interested in the prospect of some manner of half-naked naughtiness. The only joke is on the poor guy who believes the illusion. Not that I’m complaining. For a writer, or anyone who likes to observe different social environments, it’s a great way to while away a couple of hours.

Regardless, we passed a good time, and after an hour and a half in the company of several attractive women in various stages of undress, the illusion was thankfully shattered at closing time, as they filed out in sweats and dirty jeans, barely offering a tight smile to those customers they’d been cooing over ten minutes earlier. Thus reminded once again of the reality behind the sordid fantasy, we convened at a nearby IHOP to catch up on each other’s lives. “It’s so hard to stay together, passing through revolving doors…” We shared in our professional and personal successes, congratulated each other on our careers and significant others, commiserated over errant family members and friends, and talked at length about the people we were thirty years ago and their relation to the men we are today.

It was comforting to learn that I wasn’t alone in wishing I could jump back to the early ’80s to impart some hard-won wisdom to the formative, work-in-progress version of myself. We’ve all faced setbacks and obstacles in our lives, from unfortunate upbringings to poor decisions that cast long shadows over our lives, and we’ve overcome them to become the people we are today. Our 2010 incarnations are products of not just the successes but also the glitches, failures and miscues of the earlier Beta models, and all the richer for it.

Not exactly the outcome I was expecting from my latest trip in the Moreau Time Machine, but it was a satisfactory outing nonetheless. I’m not looking back, but I want to look around me now, as someone once sang. So I won’t be obsessing so much over trying to go back and change the past.

Unless I somehow find myself talked into attending a Rush convention.