If I could wave my magic wand… 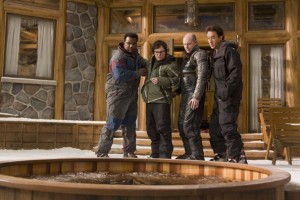 When I was in grade school, way back in the Cambrian era, my dad and I—OK, mostly my dad—built a time machine. My memories of its origins are hazy, but the inspiration for its construction was a book or series of books I was introduced to in the first grade. I was already showing signs of being a little ahead of my peers even then, so one day, during some Arts and Crafts project or other, my teacher took me aside and handed me a book and a pair of headphones attached to a compact record player, and left me to read this book, while also listening along to the story on the headphones, about a young boy’s adventures with a time machine. (I’m pretty sure there was an old man involved as an inventor-slash-tour guide, but again, my recollection is spotty—I mean, I was six years old at the time.)

The Moreau Time Machine was a wooden contraption approximately five feet tall, with a bench that sat two kids comfortably. The dashboard was outfitted with panels and switches salvaged from a local scrap yard, as was the back console and (I believe) a little overhead panel. By flipping a few switches, turning a knob or two and plugging various wires into different slots (kind of like an old-fashioned telephone operator), it was possible to imagine you were blasting off across both time and space. Naturally, this made me popular with the neighborhood kids: I remember pretending we were the crew of the U.S.S. Enterprise taking a shuttle down to the surface of a hostile planet. Sadly, the Time Machine was scuttled when the Moreau household became a blended family, and the garage in which it was docked was converted into bedrooms for my new stepbrothers. I know that photos of the machine exist, but their current whereabouts remain unknown.

I’ve been thinking about the Time Machine a lot lately, wishing I had a feasible means of traveling back to junior high so that my forty-something mind could inhabit my (considerably skinnier) seventh-grade form and avoid many of the more regrettable mistakes, born of crippling shyness, hyperactivity and general geekiness, that were made between grades seven and eleven. Since that’s not yet possible (never give up hope!), I’ve had to make do with trying to accept and be happy with myself, both past and present. Suffice it to say, mucking around with the time/space continuum would be a much easier task.

All these thoughts about Kevin Past and Kevin Present became a subject of conversation earlier this week as I played host to a couple of old friends from my middle-school days. The occasion for this get-together was an Atlanta concert by the rock band Rush, currently crossing the country on the Time Machine Tour. (Coincidence or synchronicity? You decide.)

My co-workers are apt to be skeptical, but the truth of the matter is, I’m not nearly as big a Rush fan as either of my friends. Jason is a true diehard, the kind who constantly checks in with Rush fan websites for the latest news and rumors about the latest Rush album, tour or mention in the media. Keith isn’t too far behind him—not long after Jason and I picked him up at the airport the afternoon of the show, he broached the idea of the three of us attending a Rush convention at some point. Jason was very receptive to this suggestion, whereas my reaction could best be described as a blend of condescension and sheer terror.

One of the things I most connect with in regards to Rush is drummer Neil Peart’s consistent lyrical theme of individualism—what I’ve often referred to as his “Just Do It” mentality: Live for yourself, strive to achieve your dreams, don’t let anyone tell you what you can do, etc., as illustrated most popularly in the epic “2112”—inspired by the objectivist writings of Ayn Rand (“The Fountainhead,” “Atlas Shrugged”)—and the fan favorite “Freewill.”

And so the idea of spending a day or two or three with a largely male crowd in Rush t-shirts communing over their shared love of a rock band makes me fundamentally uncomfortable. I’ve always found it ironic that a band whose lyrics so often preach independence and self-reliance, especially in opposition to organized religion (see: “Armor and Sword,” “Faithless” and “BU2B,” not to mention the aforementioned “Freewill”), attracts fans so rabid in their devotion that they could easily be mistaken for a religion—or at least a cult.

But I digress. I enjoyed the show, which dusted off a couple of obscure songs and the entirety of 1981’s landmark Moving Pictures (including, for the first time that I know of, “The Camera Eye”). I really dug “Stick It Out,” from 1993’s overlooked Counterparts, and “Presto,” from the hit-and-miss 1989 album of the same name (“If I could wave my magic wand/ I’d make everything all right”), as well as brand new selections from the band’s next album—“Caravan” and the above-referenced “BU2B.” The visual elements—the videos that played onscreen during certain songs as well as the two extended skits that opened each of the two sets—were generally well-done, and I laughed out loud at the polka intro to “La Villa Strangiato” and the reggae intro to “Working Man” during the encore.

There’s much more to my trip in the WayBack Machine with Jason and Keith, including strippers and pancakes, but since this entry in the Captain’s log is running a little longer than I intended, we’ll have to save those tantalizing tidbits for the next report.