A world away, magic is about to happen 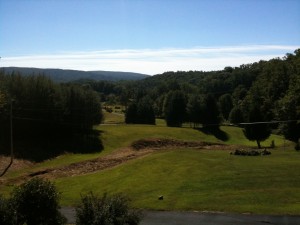 The view from here

LINVILLE FALLS, N.C.—In Atlanta, things are happening. It’s the Saturday of Labor Day Weekend, and the downtown streets are filled, quite literally, with colorful characters, as the Dragon Con Parade—a rich pageant of fairies, pirates, superheroes, Star Wars stormtroopers, vampire slayers and, of course, vampires, from the sinister to the less-threatening Twilight variety—prepares for launch.

A little to the north, far from the painted faces and exposed cleavage of underage girls made up as wide-eyed, scantily clad heroines out of some discomfiting Japanese anime, students, professionals, self-serious bohemians and self-professed bookworms of every stripe are milling into downtown Decatur for that city’s annual Book Festival, strolling past tables filled with cheap paperbacks, stopping at publishers’ booths, adjusting their rimless glasses as they stand in line for a beer while perusing the day’s schedule of author appearances, workshops and live music.

Or so I imagine. As lovely as it all sounds, I’m lost in another world.

This Saturday morning, I’m standing on the porch of a cozy three-story house, set a quarter-mile down a winding stretch of asphalt from the state road that meanders along this vibrant and tranquil outpost of rural North Carolina. I’m alone as far as the eye can see, except for the occasional car or motorcycle making its way up the mountain. My wife and her mother are doing water aerobics at the local YMCA more than ten miles away, while her father is hard at work at his part-time job at a chi-chi golf resort a half-hour or so distant. The house next door to my in-laws’, just a ways down the hill, the only other house visible on this rolling green expanse, is quiet.

I’ve been granted this cocoon of solitude to make some headway on my novel, but the idyllic morning won’t be fended off quite so easily. The soft play of a gentle breeze along my arms is as insistent as a child’s tugging at my sleeve. The air is cooler and sweeter than any I’ve felt in months, the sky an unblemished blue all the way to a horizon of faraway mountaintops framed by lush canopies of trees that fairly sparkle in more varieties of green than I was aware existed. The chittering cry of an unseen bird provides lilting accompaniment to the peaceful bristling of wind chimes.

I feel a compulsion to capture this scene, not as some compositional exercise but as a means of bearing witness to something beautiful. I want to absorb the warmth of the sun into my cells, to record the rustling of the wind through the leaves and the feel of the air on my skin so that I can pull it out at a later date, feel the echo of those same sensations and affirm that yes, this moment existed, it happened, the world can be as simple and serene and inspiring as this.

Ten years ago, I had the absolute pleasure of working with a woman named Maura York, a kind, funny and thoughtful friend who encouraged my budding career and inspired me with her work ethic. Often, at the start of a day in our obscenely spacious Citysearch office in downtown New Orleans, or when we were about to tackle a particularly thorny project, she’d flash a brilliant smile and say “Let’s make some magic happen!” This morning, it feels like magic is not only possible but inevitable. It’s going to happen. Anything, as the cliche goes, can happen.

On another note, today is my fifth wedding anniversary, a fact that only increases my inclination to reflect on life in this gorgeous setting. I’m married to a smart, fun, beautiful woman. I’ve got wonderful friends and a family I love, and a fantastic job—one with its fair share of headaches, but one I wouldn’t trade for twice the money. (Probably.) It’s hard to say out loud, and it’s just as hard to type the words: My life is good. Right now, right here, today, I’m … happy.

It hasn’t always been this way, and there have been periods when I couldn’t have imagined this—imagined being here, both at this moment in life and in this particular moment in North Carolina, allowing myself to enjoy and accept it.

My heartfelt and sincere thanks to all of you who have been a part of it, and especially to my lovely wife Eden, who surprises me every day with her love for as imperfect a man as me. Forgive me if I careen into Oprah territory here, but I hope that you, wherever and whenever you are, are having as rich a moment as this one, and that you make your life whatever you want it to be.

One Response to A world away, magic is about to happen