The Curious Case of Frost/Nixon 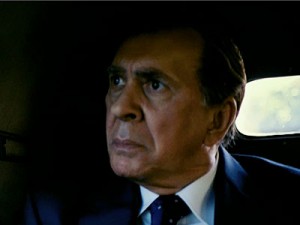 Yesterday, I discussed how the Oscars are perceived by many as the official record of the best pictures, performances and achievements in the year in cinema—all of which was a lengthy preamble to what I’m here to say today.

Since the Oscars do carry so much weight, I have a message for the voters of the 81st annual Academy Awards, held February 22, 2009.

Ladies and gentlemen of the Academy: I submit to you that you have committed a grievous error in awarding the Best Actor trophy to Sean Penn for his role in Milk. Upon reviewing the evidence, I humbly request that you immediately issue a correction and hand the award to Frank Langella for his performance as Richard Nixon in Frost/Nixon.

While Penn’s portrayal of Harvey Milk was indeed impressive, here’s the thing: I never once forgot that I was looking at Sean Penn. It’s an issue I have with a lot of contemporary actors. All movies require a suspension of disbelief, a willingness to put what you know about the actor aside and allow the character to fill your senses. But that separation becomes exponentially more difficult with certain actors who have, perhaps for reasons beyond their control, become larger than life—like Tom Cruise, Jack Nicholson or Robert De Niro. Leonardo DiCaprio, while I wouldn’t classify him as “larger than life,” falls into the same category, mainly because of the insane media glare that followed Titanic. Again, not necessarily his fault, and it might very well be my problem, and not his. Still, it can’t be helped.

Sean Penn certainly did a tremendous job of transforming himself into an openly gay activist and elected official, and was certainly more deserving of such an honor than his fellow nominee Mickey Rourke. (Rourke was heartbreaking in The Wrestler, but it’s pretty much universally accepted that the role wasn’t exactly a stretch—in his own way, he had already lived that story.) But throughout Milk, I kept remarking to myself about Penn’s performance: “Man, he’s really nailing those mannerisms, those body movements, that voice inflection. What a great job he’s doing.”

By contrast, Langella’s turn in Frost/Nixon, which I only got around to watching last weekend, had me from the very first frame. Granted, Langella, although a venerated actor, isn’t a household name on the same level as Penn, whose punch-happy ways and political views make him a lightning rod. (For that reason, I’m interested to see what the reaction will be to his role as Joseph Wilson in the upcoming Fair Game, about the Valerie Plame affair.)

I think I bring a little more awareness of Frank Langella to the table than the average viewer—I can practically recite his every line as the sinister chief of staff in Dave, and on the flip side, there’s that whole thing about having once been romantically linked with Whoopi Goldberg (which I’ve never completely gotten over). To my mind, that makes it all the more remarkable that Langella sucked me in so completely.

Playing a real-life figure can be tricky, as Penn can surely attest. But I submit that it’s especially tricky when the role you’re attempting to inhabit is as large as that of our disgraced former president, and even more so when you look nothing like said president.

Langella didn’t slap on a prosthetic nose, like Nicole Kidman playing Virginia Woolf in The Hours, nor did he try to approximate the late ex-president’s distinctive hairline. He simply conveyed the emotional truth of this fascinating figure, the only U.S. president to resign from the office, with some of the more subtle tools in an actor’s bag of tricks: conveying the sadness of Nixon’s position, his confusion and outrage at how far he’d fallen, through his eyes, his movements, his voice—and his silences.

Frost/Nixon has taken some heat for its politics, the way it allegedly fudges some details of David Frost’s interviews with Nixon in order to magnify the importance of certain segments or diminish others. I’ll leave that to scholars better suited to address such issues. I can only say that the film is exceedingly well-cast—Michael Sheen as the ambitious playboy Frost, in over his head, Oliver Platt and Sam Rockwell as his researchers, Matthew Macfayden as his producer and the beautiful but underused Rebecca Hall as his girlfriend—and that it’s remarkably captivating, given that its most exciting scenes involve two men sitting across from each other, talking.

But none of that would mean anything without Frank Langella’s authoritative, un-showy and deceptively simple depiction of a fallen leader, a proud, deeply flawed and tragic figure to rival any Shakespeare ever committed to parchment—an accomplishment of which Sean Penn may be capable, but one he unequivocally did not pull off in Milk. It’s only morally right that you set the “official record” straight and award Langella the Oscar for Best Actor at once.