Five reasons not to watch the Super Bowl 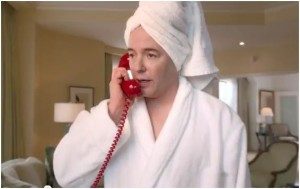 Unless you’ve been living under a rock for the past few weeks, you’ve probably heard that Super Bowl XLVI airs this Sunday.  If you have been living under a rock, you might seriously consider heading back there until Monday, because this game offers very little reason to crawl out into the light of day. This year, the American sports world’s biggest event features the rematch no one asked for, with the New England Patriots poised to avenge themselves against the New York Giants, who bested the undefeated Pats in XLII back in early 2008.

You’d think I’d be excited to watch this grudge match between two championship teams. You’d be wrong, and here are five reasons why.

1. Tom Brady is a privileged girlie-man

Brady, the Patriots’ quarterback, has won three Super Bowls. He’s amassed a slew of records. He’s married to a Brazilian supermodel (I don’t happen to think Gisele Bündchen is all that, or even a bag of chips, but I recognize the accomplishment nonetheless). By all relevant criteria, he is a god walking among mortals.

But not just any god: He’s the kind of god you want to punch in the face. He’s your senior class president. He’s as bland as a loaf of Wonder Bread. He’s the instrument through which New England Patriots coach Bill Belichick, a sourpuss who makes Dick Cheney look like Elmo, has notched three Super Bowl victories. He left his baby mama, the beautiful Bridget Moynahan, for a supermodel. Even worse, for a while there he was wearing his hair in what we can only assume was a slavish imitation of Justin Bieber’s. Really, do I need to say anything else?

Giants quarterback Eli Manning has labored in the shadow of his more popular older brother all his life. And even now, when he stands on the precipice of finally besting Peyton in the one stat that really matters—number of Super Bowl victories—he’s overshadowed by his amazingly lifelike Terminator of a brother once again.

If you tune in to ESPN or your local sports-talk radio station, you might occasionally come across a couple of guys arguing about whether Eli is an elite NFL quarterback. That is, after you sit through 12 hours of gum-flapping about whether Peyton will retire from the Indianapolis Colts, or be let go by the Colts, or ever be able to play football again because his manufacturers failed to follow code when they constructed his remarkably human-looking neck.

Never mind that Eli just might double his brother’s total of Super Bowl rings on Sunday at a towering two to Peyton’s one. Eli simply isn’t interesting enough to divert attention from a swirling lack of news about a quarterback who hasn’t played all year. Turns out you can spell “elite” without “Eli.”

I’m told that The Voice is a decent singing competition. I wouldn’t know. I don’t watch the show for a number of reasons, chief among them being that I have a triple-digit IQ, testosterone and self-respect.

I know people who watch The Voice, and they say it’s better than American Idol. By that logic, NBC could air episodes of Whitney and Are You There, Chelsea? after the big game. Or Lana Del Ray’s Saturday Night Live performance. Or even bring back the late, unlamented Outsourced. You get the idea.

I actually feel a little bad for not wanting to watch the show. I like Cee-Lo Green and I respect Blake Shelton, although I’d be hard pressed to name one of his songs at gunpoint. I even have a soft spot for Christina Aguilera, whom I’ve always considered to be more talented, more attractive and probably more approachable than her former fellow Mousketeer Britney. But the fourth of the show’s quartet of celebrity “coaches” is Adam Levine, lead “singer” of the “band” Maroon 5. So, yeah, can’t do it.

“What’s wrong with Maroon 5?” you ask. Said “band” is responsible for the inescapable “hit song” “Moves Like Jagger.” What’s wrong with this “song”? Well, let’s see. One, it features the most egregious use of whistling since the Scorpions’ “Wind of Change,” or maybe Guns N’ Roses’ execrable “Patience.”  Two, it presumes (incorrectly) that Mick Jagger’s moves are something to be emulated. Have the writers never seen the man dance onstage? It’s like watching a chicken run around after it’s been decapitated. Only, you know, less sexy.

4. The ads have been spoiled

For those who don’t follow football, it’s the commercials that make the Super Bowl an event. Companies unveil their wackiest clips during the big game, and sometimes the ads eclipse the action on the field even for pigskin fans. That’s not the case lately, but it has been known to happen.

In fact, that might be enough to make me tune in if it weren’t for one thing: I already know far too much about these ads. The Lincoln Park Zoo is protesting a CareerBuilder.com ad that features monkeys in suits. Entertainment Weekly is offering a complete guide to the commercials. And of course the Ferris Bueller spot is already viral. So much for that.

2 Responses to Five reasons not to watch the Super Bowl