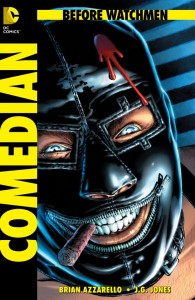 Earlier this week, DC Comics officially announced what many in the comics community had been whispering about for months. The publisher is releasing a series of prequels to the landmark 1986 Alan Moore/Dave Gibbons miniseries Watchmen. The comics, grouped under the banner Before Watchmen, will consist of seven miniseries highlighting the Silk Spectre, Rorschach, the Minutemen, the Comedian, Ozymandias, Nite Owl and Dr. Manhattan. Each issue will feature a two-page back-up story, Curse of the Crimson Corsair, which seems to be a nod to Watchmen’s comic-within-a-comic Tales of the Black Freighter.

You don’t have to have the macrocosmic perspective of Dr. Manhattan to guess that this news has provoked negative reactions ranging from skepticism to derision and howls of protest from fans of the original series. Even Forbes weighed in on the matter. Throw in the fact that Moore, the reclusive, enigmatic genius who wrote the series, has stated his vehement opposition to the idea (and harbors longstanding enmity toward DC), and you’ve got one polarizing powder-keg of a project. (Holy alliteration, Batman!) Messing with Watchmen far outweighs such comics “controversies” as, say, the Spider-Man Clone Saga or the death of Superman (or Batman, or Captain America, or … you get the idea ).

Hey, I get it. Watchmen was a game-changer that blew the doors off the preconceived notion that comic books, particularly those featuring characters who dressed in costumes and fought crime, were fundamentally incapable of exploring weighty, metaphysical themes and employing complex narrative structures.  It was also a complete story with precious few loose ends. Indeed, the ending works, to the extent that it does, precisely because it invites the reader to reflect on what he’s just read and to imagine what might come next.

Still, I can’t get too worked up about Before Watchmen. In fact, I don’t think it’s a bad idea at all. Why? Well, I’m glad you asked.

First and foremost, the comics industry is just that—an industry. And despite the popularity of its garish, spandex-clad ambassadors at the multiplex, it’s not an extremely robust one at the moment.

“It’s our responsibility as publishers to find new ways to keep all of our characters relevant,” DC Entertainment Co-Publishers Dan DiDio and Jim Lee announced in the official press release. And they’re exactly right. Collected volumes of Watchmen have remained in print since the series ended, a testament to the work’s enduring popularity. In spite of that fact, the property has sat dormant in DC’s vault for the last quarter-century. From a business standpoint, it makes no more sense not to capitalize on that popularity than it would to stop publishing Batman comics.

It’s easy for critics to paint Before Watchmen as a conflict between art and commerce, with the latter (money-hungry DC) trampling all over the former (a sacrosanct, universally acclaimed work that makes a strong case for the comics medium as an art form). That argument is short-sighted, if not downright naive. Very little of what we consider “art” can be completely divorced from commercial concerns. Artists sell their paintings, and many of them over the centuries have enjoyed the support of patrons and benefactors. From the very first issue of Action Comics to Star Wars, Buffy the Vampire Slayer, Lost—everything that contemporary consumers of popular culture revere exists because someone, somewhere, believed they could sell ads around it and/or charge admission to it. Don’t forget that Watchmen itself was born out of DC’s desire to do something with characters it acquired from Charlton Comics (more on that later).

It’s not just DC’s right to make the most of their property—in this market, it’s their duty.

2. We love sequels (and prequels)

That’s just a fact. When a story really resonates with us, we want more stories set in that same world. It doesn’t even matter if the new stories are good (see: Indiana Jones and the Temple of Doom; the Star Wars prequels), or even if they crap all over the source material (see: Highlander II: The Quickening).

And there’s no reason to believe that will be the case with Before Watchmen, given the level of creative talent involved (see below) and the intensity with which the Watchmen faithful will scrutinize the project. And the truth is that while a sequel would be a futile exercise, that’s not necessarily the case with prequels. The world of Watchmen is rich with possibilities, filled with tantalizing glimpses into a past just different enough from our own to set the mind wandering.

“As far as I know,” Alan Moore is quoted as having sniffed, “there weren’t that many prequels or sequels to Moby-Dick.” So what? I don’t know about you, but if there ever was a prequel to Moby-Dick, I’d be all over it. As for a sequel? Well, not so fast there, Alan.

The writers and artists assembled for the Before Watchmen projects boast strong resumes. Who better to handle a Rorschach or Comedian miniseries than Brian Azzarello, writer of the acclaimed noir series 100 Bullets? (Well, maybe Ed Brubaker would come close, but let’s not nitpick.) Darwyn Cooke (DC: The New Frontier) on Minutemen? Sign me up. J. Michael Straczynski? Len Wein? Amanda Conner? Please. Considering that Rob Liefeld is still getting work, DC could have chosen far worse.

Alan Moore’s hostility toward DC is well-documented, and it’s not as if he doesn’t have some valid points about the comics industry and some if its practices. Moore apparently believes that DC has acted unfairly toward him: He’s stated that the original Watchmen contract promised to revert the rights back to him and Gibbons once the series went out of print—something that has yet to occur, given the book’s continuing popularity as a collected edition. He may feel that he is owed ownership of the title and characters, and wish that DC would not attempt to make even more money off of his creation. He may even have the moral high ground.

But Moore seems to have allowed his emotions to color his reasoning, basically asserting that DC is creatively bankrupt for seeking to make money off of characters the company owns.

“I tend to take this latest development as a kind of eager confirmation that they are still apparently dependent on ideas that I had 25 years ago,” Moore said of DC in the New York Times. Well, to an extent, that’s true, just as they’re still dependent on a character Jerry Siegel and Joe Schuster created in 1932, for example. But it’s hard to take Moore’s statement as anything more than sour grapes from someone who first made a name for himself scripting comics about characters created by other people (Marvelman, Captain Britain, Swamp Thing)—and who originally pitched Watchmen as a murder mystery starring characters from Charlton Comics.

On top of which, his two most talked-about works of the last decade or so have been The League of Extraordinary Gentlemen and Lost Girls, a truly graphic “graphic novel” in which Dorothy from The Wizard of Oz, Alice from Alice’s Adventures in Wonderland and Wendy from Peter Pan meet as adults and recount some extremely erotic encounters.  As comics author Peter David told Newsarama: “The fact that Moore is so vehemently opposed to the other authors working upon his characters—characters that are pastiches of Charlton Comics [characters]—might tell you something about how L. Frank Baum would likely have reacted to Moore’s handling of Dorothy.”

One can still enjoy the first Star Wars trilogy (or at least the first two films) and ignore the fact that the prequels undermine everything cool about Darth Vader by asserting that he’s just a whiny, lovesick little girly-man in a cool-looking life-support system. You don’t have to accept the wretched Hannibal Rising, which does almost as much damage to Hannibal Lecter, as canon. Temple of Doom need not affect your enjoyment of Raiders of the Lost Ark. The original Watchmen is still there, complete and inviolable. And no prequel or sequel will ever take that away.

And if the very idea of a Watchmen prequel still gets your limited-edition Silk Spectre undergarments in a twist, well, you might need to get out more.

One Response to Five thoughts on DC’s Watchmen prequels