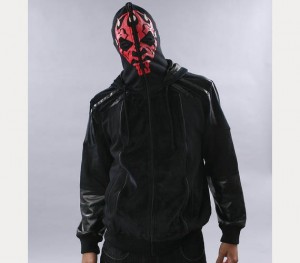 Hoodies: Sweatshirt of choice for the Forces of Evil

5. Turtle Nation Gets Up in Arms

Having turned the dumbest property in ‘80s toy history into a blockbuster film franchise, Transformers director Michael Bay is now turning his attention to the second-lamest property: The Teenage Mutant Ninja Turtles. Wait, hold up—that’s not the apocalyptic part.

Recently, the Armageddon auteur, who’s producing a Ninja Turtles film slated for December 2013 release, let slip that fans may need to slap another descriptor onto the pile when discussing Raphael, Leonardo, Michelangelo and Donatello: alien. Be patient; that’s not the end-of-the-world part, either.

This is: Rather than apathy, eye rolls or hoots of derisive laughter, the Teenage Mutant Ninja Turtle fan community (seven words I never thought I’d type in the same sequence) greeted this tidbit with … outrage. A voice actor from the original film calls Bay’s take a “sodomizing” of the franchise, and the website i09 suggests that Bay’s not the first to have “crapped” on the turtles.

Granted, it’s not unusual for obsessive fans of sci-fi/fantasy/comic/cartoon properties to get up in arms over the tiniest deviation from scripture. As a fan of many such properties, I get it. Try to cast Ashton Kutcher as the next Doctor Who, move the action in Game of Thrones from Westeros to Beverly Hills, or tell me that Peter Parker isn’t a likeable science geek but rather someone who talks, looks and acts like Tobey Maguire, and I’m howling right there with you. (Don’t even get me started on Tom Cruise playing Jack Reacher. That’s a sign of the apocalypse for another day.) But we’re talking about a franchise about … turtles. Who are mutated adolescent ninjas. Who co-starred in a movie subtitled The Secret of the Ooze with rapper and noted thespian Vanilla Ice. Remind me why anyone cares?

The flick’s actual director has hinted that Bay’s comment may have more to do with the ooze that turned the terrapins into walking, talking death-dealers. Whether that fits in with, contradicts or builds upon the turtle “mythology” is a debate best left to … I’m sorry. I can’t even finish that sentence, because I’m an adult male and I’ve had sex. With another person. Moving on.

Apparently, the folks at Fox News decided that the tragic shooting death of Trayvon Martin wasn’t a sad enough spectacle, so they asked the thought-provoking attention-seeking “journalist” to weigh in on the subject. Rivera’s take? That the 17-year-old boy’s fatal mistake was … wearing a hoodie. Sure, the hooded sweatshirt has become a fashion staple for no-goodniks. But to suggest that pulling one on is akin to strapping on a sandwich board proclaiming one to be the next Unabomber is a stretch even Reed Richards wouldn’t attempt. But Rivera’s twisted logic isn’t as offensive as the “he was asking for it” subtext once reserved for rape trials in which the victims were attractive women who’d invited trouble by showing a little skin.

3. Ashton Kutcher has a good week

Marrying Demi Moore, palling around with Bruce Willis, accruing more Twitter followers than CNN … life’s been pretty good for a guy whose main accomplishments in life have so far amounted to playing a lunkhead on That ’70s Show and hosting a rehash of Candid Camera. Oh, and let’s not forget stepping in for Charlie Sheen on the most reviled sitcom in history. Offering further proof that fairness is an empty manmade concept at which the heavens scoff, the past seven days have found Mr. Kutcher joining the elite few who will get to take a sightseeing shuttle into space, and on the receiving end of what appears to have been more than just a booty call by singer and Battleship “actress” Rihanna.

2. The Saints get body-checked in bounty fallout

The NFL has lain such a fierce whooping on the New Orleans Saints that you’d think Commissioner Roger Goodell was offered a million-dollar bounty for taking the team out of NFC South contention for the next several years. For their part in the bounty scandal, the National Football League suspended Coach Sean Payton (who led the team to its only Super Bowl victory) for a year, General Manager Mickey Loomis for eight games, and assistant coach Joe Vitt for six games. In addition, the team loses two second-round draft picks and has been fined $500,000. To state the obvious, the Saints are in a world of hurt, and that’s before the penalties that are expected to be levied against individual players involved in the affair. It’s a devastating blow to a populace that has latched onto this team with a passion unmatched in the city’s history.

Speaking of football and people from New Orleans, the most head-scratching omen of our impending doom this week also involves pigskin and the Crescent City:

1. Pat Robertson is still on the air

Former Isadore Newman quarterback Peyton Manning has announced that the second phase of his football career will take place in Denver, where last year the inconsistent Tim Tebow led the Broncos to the playoffs and triggered a wave of Tebowmania that dwarfed even the fervor surrounding his years at the University of Florida. The Broncos, who’ve never been keen on committing to Tebow as their starter for next season, promptly traded the Bible-totin’ second-year QB to the New York Jets. New York Jets quarterback Mark Sanchez surely isn’t thrilled. You know who else ain’t happy? Televangelist Pat Robertson.

On his long-running show The 700 Club, Robertson registered his complaint against what he perceives as unfair treatment of the God-fearing Tebow. Addressing an audience of shut-ins and viewers too lazy to change the channel, he offered the following Christian opinion: “OK, so Peyton Manning was a tremendous MVP quarterback, but he’s been injured. If that injury comes back, Denver will find itself without a quarterback. And in my opinion, it would serve them right.”

Huh. Interesting. By that logic, Pat, if some deranged, doddering and deluded Muppet blamed Sept. 11 on the ACLU, feminists and gays, suggested that terrorist attacks and Hurricane Katrina were retribution for abortion, and hinting that someone should blow up the State Department … if someone like that suffered some kind of setback, well then it would only serve him right, wouldn’t you say?

Okay, I’m not crossing my fingers that Pat Robertson experiences an injury or anything like that. I’d like to believe I’m better than that. But the fact that this dangerous crackpot still has a platform, and that people take what he says seriously … if that’s not evidence of the end times, I don’t know what is.