A life lesson learned over beignets 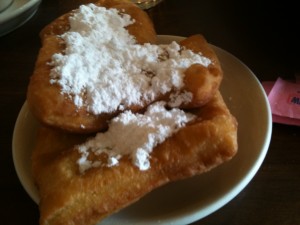 We’re programmed to rage against the dying of the light. You can see it in the older man quietly appreciating a lithe young woman old enough to be his granddaughter because his primal coding to procreate doesn’t come with an off switch. It’s there in the fight-or-flight reflexes of our lizard brains, in our stubborn insistence that we can climb that rickety ladder, lift that heavy load, as well as we ever could.

I was reminded of that today enjoying beignets and café au lait with my dad.

Eden and I are in New Orleans to celebrate Dad’s 75th birthday tonight. It’s a daunting undertaking. In two hours we’ll be hosting a dinner for a dozen or so family members, including my brother Keith, his two teenage boys Ryan and Alex, my stepmother Judi, her father and his lady friend, and one of my stepbrothers (also named Keith), along with his wife and two young children.

As with most such family gatherings, I expect the dinner will carry the faint whiff of forced conviviality—of love mixed with grudging obligation. So for me, the purer celebration came earlier this afternoon as Eden and I met Dad for a late breakfast of fried dough and powdered sugar at Morning Call in Metairie. Eden and I both prefer Morning Call’s beignets to the far more famous Café du Monde—Morning Call’s are fluffier and airier, although Café du Monde’s are often a little crispier, which I also like—and it’s closer to our hotel (and to Dad).

There the three of us were, talking about family (the latest on Keith and the boys, etc.) and other distressingly grown-up things, as I tried to reconcile the aging man next to me with the garrulous force of nature he still is. And even after all these years, he’s surprising me, revealing things I never knew: like how as a middling defensive football player he was asked to take over as sports editor for his high school newspaper, or how he felt overwhelmed and totally unready when I was born. And, most confounding of all for anyone who’s ever met Bob Moreau, how he was a shy, introverted kid, bookish and quiet, more like his first son than the talkative, opinionated man he became.

It’s impossible not to feel a sharp pang of sadness watching someone you love, even as imperfectly as I’ve loved my dad, hit the three-quarters-of-a-century mark: taking note of the unkind deposits time has left in his face, the age lines chiseled into his features, absorbing the certainty that one day he’ll be gone.

As I said, we’re programmed to rage against the dying of the light. And so we look the other way, refusing to acknowledge the creeping shadow of mortality, even as it slaps us in the face. We keep trying to square the circle, to force it back into its box, into the overstuffed closet of things to deal with some other day. There’ll always be time.

But that’s the thing about life; it’s all about the scarcity of time. Even if one lives to be a hundred, it’s a life cut tragically short. There will never be enough.

My dad and I are both adept communicators, in our own ways. But we don’t often talk about the awkward stuff, like what we mean to one another, how proud each is of the other. For me, that changed earlier today, with the realization that there’s still so much left to learn about the man who more than almost anyone else made me what I am. And so little time left to share my own stories. So I’ve decided more of these kinds of sit-downs are in order.

With beignets, of course.

One Response to A life lesson learned over beignets