The Rock and Roll Hall of Fame gets it right

I don’t usually pay much attention to the Rock and Roll Hall of Fame. The whole idea just seems absurd, frankly. When I was a teenager staring up at pictures of KISS, Def Leppard and Judas Priest, I never once said to myself, “One day, I’ll be a rock god in a tuxedo playing at a formal induction ceremony to a group of stuffy media types!”

I did frequently remind myself that I needed to take down those Def Leppard pictures. I was used to the scorn my dad would direct at KISS or the Priest. (I’m not sure if he ever described either as “a bunch of crumbums,” although I wouldn’t be surprised; it’s one of his favorite phrases these days.) But that photo of Leppard frontman Joe Elliott in his sleeveless Union Jack T-shirt, ripped out of an issue of the heavy metal magazine Hit Parader, invited hoots of derision from my friends, which was another matter altogether. “Is that even a dude?” my friend Styb would ask, to which I would reply “Shut up!” Yep, I sure told him.

There are plenty of arguments against the Hall of Fame. For one thing, Halls of Fame make perfect sense for sports, since the criteria for entry—athletic achievement—is something that can be objectively measured. (That’s not to say that pro sports Halls of Fame don’t have their flaws, but let’s not wander too far off the path yet.)

Rock and roll is by its very nature much more raw, emotional and subjective. Its power is in its ability to knock you off your feet with a great song, an unforgettable hook, a killer guitar solo. The things that can be measured—album and concert ticket sales, a song’s position on the pop charts—don’t always jibe with a rock group’s true impact. Some of the greatest rock bands of all time never achieved the commercial success of an act like the Eagles, who are fine musicians but are to me as far removed from the dangerous spirit of rock and roll as Gilbert O’Sullivan.

Onto that foundation of ill-advisedness, add the fact that admittance into this pantheon of rock “greatness” is controlled by a group of opinionated critics who allow their personal tastes to dictate who’s worthy of inclusion. Many musicians and their fans have griped that Rolling Stone co-founder Jann Wenner works overtime to exclude certain acts from consideration based on his own personal bias, much as the magazine itself turns its nose up at certain acts or genres it deems “uncool”—which is hilarious given the magazine’s hidebound worship of Eric Clapton, the Who, the Rolling Stones and other long-in-the-tooth pioneers who, while undoubtedly influential, have long since ceased being relevant.

All that said, however, I’m pleasantly surprised by the announcement of this year’s honorees. Neil Diamond should be a no-brainer, although I’d long ago written off his chances, given his dalliance with cringe-inducing schmaltz like “Heartlight”—plus the fact that he wrote “Daydream Believer.” E! Online took the easy way out, pointing out that Diamond doesn’t rock as hard as the Beastie Boys or Bon Jovi (more on them in a minute) and questioning whether Barry Manilow or Neil Sedaka might make the cut next year. That’s cheap. His hokey moments aside, Diamond is a natural selection. 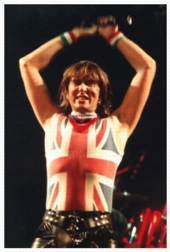 Joe Elliott of Def Leppard: Kevin, is there something you need to tell us?

Hats off to veteran music critic David Wild, himself a Rolling Stone contributor with whom I had the privilege to work at the inaugural VH1 Rock Honors in 2006, for his long-standing advocacy for Diamond’s inclusion. (That particular iteration of the short-lived Rock Honors franchise celebrated the works of Queen, KISS, Judas Priest and … Def Leppard. I got to meet Paul Stanley and ogle Natasha Henstridge up-close and personal. It was one of the highlights of my career.)

Likewise, I’d have bet my house against the inclusion of Alice Cooper. I wore out the grooves on my vinyl copies of his early solo albums Welcome to My Nightmare and From the Inside; I still have Nightmare and Billion Dollar Babies on my iPod. And although much of his ’80s output was calculated pandering to the hair-metal crowd, he’s rebounded with some solid if overlooked albums at the turn of the century.

I’m not as surprised by the appearance of Tom Waits and Dr. John on the list, but I wholeheartedly agree with both choices. As a boy growing up in New Orleans, Dr. John was part of my musical DNA before I had any idea who he was; I was blessed to live in a city where you could hear “Right Place Wrong Time” on the radio on the bus ride to school. Not to mention he’s recorded some really strong albums lately. And while I came late to the Tom Waits party—I’m not as big a fan as my wife Eden or my friends Larry-Fred or Styb—I respect and admire him a great deal, and his “Glitter and Doom” tour a couple of years ago was one of the best concerts I’ve ever seen.

I can’t even pretend to be an expert on Darlene Love, but I do know she’s worthier than some of this year’s nominees who didn’t make the cut. Donna Summer? A decent disco diva, but not really influential, in my book. The Beastie Boys? I suppose it’s inevitable, although I’ve never been a fan. Donovan? Meh. Chic? Decent choice, although I’d honor Nile Rodgers as a producer first. Bon Jovi? A popular touring act, to be sure, but if we’re talking musical impact, I can’t hear you because I’m too busy laughing.

As for LL Cool J, his time will come. (Yes, I know he’s a rapper, not a rocker. But rock and roll is about attitude as much as anything else, and besides, that barn door’s already been opened.) In the meantime, until Rush, Soundgarden or Iron Maiden are nominated, I think I’ll go back to not caring all that much.

After I take those Def Leppard photos down off my bedroom wall. I mean, I like Joe Elliott and all, but my wife’s starting to get the wrong idea.