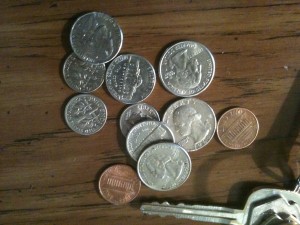 Change is in the air: I woke up this morning without anywhere to be, unemployed for the first time in almost seven years. I got up and got dressed, just as I always do, had breakfast, grabbed the morning paper, and began my new morning commute … down the basement steps to my home office.

Can you feel the winds of change? It’s a pretty unsettling feeling to find yourself unmoored from the job and routine you’ve enjoyed for so long. But it was comforting this morning to take stock of the world beyond my lonely little island and find that, indeed, constant change is here to stay.

Game changers: The highly touted meeting of the Pittsburgh Steelers and the Green Bay Packers in last night’s Super Bowl XLV promised to result in one of the most riveting contests in memory. Instead, the match-up between these two blue-collar teams with long and storied legacies produced one of the more ho-hum contests in the big game’s recent history.

Change the channel: The Super Bowl wasn’t the only institution looking a little long in the tooth last night. This year’s much-anticipated Super Bowl commercials were a disappointing bunch, to be sure. The Baby Darth Vader ad was cute enough, and Bud Light was good for a couple of chuckles at the gathering I attended, but by and large this was an evening of retreads rather than marketing innovation, as my esteemed colleague in blogging The Classless Chap predicted before the game had even started.

Change of perception: Meanwhile, in what seemed a promising step forward, for the first time since the “Wardrobe Malfunction” debacle of 2004, the halftime entertainment was provided not by an aging soul-funk superstar or classic rock forefather, but by the Black Eyed Peas, a modern music act that actually achieved its greatest success in this century. Unfortunately, the performance was a dud. The Peas’ prominent place in popular culture probably won’t take a hit, but millions of people got a crash course in the undeniable truth that slickly produced radio hits don’t translate well to the live stage, and that the ability to write a catchy pop hook will always take a back seat to the talent it takes to write and perform a great song designed to move audiences one soul at a time.

Change your tune: Earlier in the evening, Christina Aguilera decided to change the lyrics to The Star-Spangled Banner. She would have been better served changing up her act, toning down the showy vocal acrobatics that prompted oddsmakers to take bets on how long it would take her to finish the National Anthem. Aguilera’s catching a lot of flack for flubbing the words right now, but an over-reliance on the melismatic style (stretching a single syllable out over multiple notes) that too many singers of her generation confuse for talent has already made her a caricature.

The more things change, the more they stay the same: AOL has acquired the Huffington Post. Usually, when someone gets bought out, they become less powerful, but Arianna Huffington stands to become even more omnipresent as a result of the merger, as the freshly minted editor in chief of the Huffington Post Media Group, an umbrella that encompasses all of AOL’s content.

Leopards don’t change their spots: While Huffington expands her power base, growing into the only one-woman media brand with the potential to unseat Oprah Winfrey, Sarah and Bristol Palin seek to protect their own brands by registering their names as registered trademarks. (Is it just me, or does that feel more like the move of a woman looking to cash in while the cashing is good than that of a viable presidential candidate?)

Can you spare some change? Here at home in Atlanta, even more changes are afoot. The mayor is shutting down the controversial Red Dog narcotics squad. Creative Loafing Editor in Chief Mara Shalhoup has been named editor at the esteemed Chicago Reader.

The change-up: And then there’s talk that Jon Bon Jovi is interested in buying a stake in the Atlanta Falcons. I’m not sure whether Falcons owner Arthur Blank reached out and asked JBJ to “Lay Your Hands on Me,” if Jon will ultimately tell the Falcons to “Have A Nice Day” or instead pledge that “I’ll Be There for You.” Still, it’s entirely possible that the rocker could help the Birds ride to the Super Bowl in a “Blaze of Glory.” For the time being, skeptical fans should “Keep the Faith.”

Changes in latitudes, changes in attitudes: What’s that? Those puns went down like “Bad Medicine”? Too bad, because “It’s My Life.” And from down here in the Island’s new Basement Command Center, I’m feeling pretty good about it at the moment, thanks for asking. The narrative of my life isn’t being mucked with the way Huckleberry Finn’s recently was; instead, a new chapter is being penned. And as a certain formative song from my high school years named for Huck’s best friend goes: “Always hopeful yet discontent, he knows changes aren’t permanent–but change is.”

Tweet
This entry was posted in Just Sayin', Music, Sports. Bookmark the permalink.