How I spent my spring break 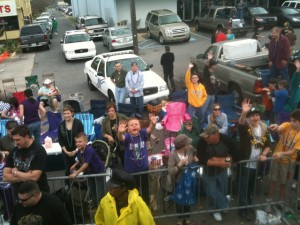 Mardi Gras Day, 2011, Metairie Louisiana. Believe it or not, this is the best photo my iPhone could take.

Dear readers: Forgive the long gap between posts: It’s been a really eventful couple of months, with lots of things to write about but, conversely, no time to write about it.

Okay, that’s not technically true: as a newly minted gentleman of leisure, I’ve found myself with plenty of time to write, but all of that time (and more) has been devoted to finishing the first draft of a novel, which is almost complete. Tonight, though, the words aren’t coming, and I think it’s because there are other words, other feelings, scratching impatiently at the backstage door, demanding the chance to tell their story.

As you probably know, whether from reading the previous post, following me on Twitter or Facebook or actually knowing me in real life, the newspaper at which I worked the last six-plus years folded its tent and went quietly into that good night back at the beginning of February. There’s a lot to say about that, of course, but I don’t think enough time has passed yet. Suffice it to say that the handwriting had been on the wall (hell, it was painted on every surface and stitched into the carpet), and that when the patient finally expired, the prevailing feeling wasn’t sadness, shock or fear—we’d had time to get used to the idea—but one of relief. The waiting, the uncertainty, the anxiety of it all were gone, and those of us affected could begin to focus on what came next.

What came next for me was a long-planned trip “home” to New Orleans, to ride with my dad in the Krewe of Argus parade, which kicks off Mardi Gras day in the suburban center of Jefferson Parish. Dad is heavily involved in the local chapter of the Special Forces Association (he joined the Army right out of high school, used to jump out of perfectly good airplanes on a regular basis and retired as a lieutenant colonel from the Army Reserve when I was in college). He spends a lot of time organizing and raising funds for the chapter’s Host a Hero for Mardi Gras program, which gives retired and active-duty military personnel the chance to partake of the unique experience of riding in a Mardi Gras parade. It’s a big deal for him, and with my darling wife’s encouragement, I decided I’d go home for Mardi Gras to share the experience with him. After all, he turned seventy-five back in December, and while he’s in good health (knock on wood), there’s no telling how much longer he’ll be involved at this level—including riding in the parade itself, which as I learned is a pretty exhausting undertaking.

I’d originally allotted a week for the trip, but after finding myself with no office to show up at every morning, I opted (again, with my wife’s blessing and support) to extend the trip to two and a half weeks. This would allow me to spend quality time with my father, my brother, my nephews and my friends, and even to catch up with some folks I hadn’t seen since leaving New Orleans for Atlanta back in September of 2001. I’d spend my birthday in the city of my birth, and leave shortly after my little brother’s birthday, making for a nice little symmetrical package.

I’m not sure exactly how it happened, but I left Atlanta a relatively successful (if temporarily between gigs) writer and editor with the whole world ahead of him, and arrived in New Orleans an unemployed would-be novelist at loose ends, trailed by an ever-present cloud of melancholy. 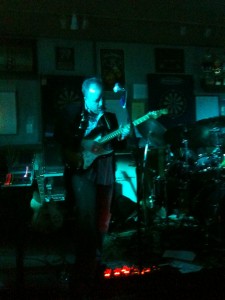 Jason playing with the Flashback Chameleons at Dago's in Kenner.

Don’t get me wrong: I had a blast. Riding in the parade on Mardi Gras was incredible (although I was sick as a dog). I spent time with some of the people I love most in the world, ate at some great restaurants, played Laser Tag with my nephews, spent a wonderful night reminiscing with friends about our role-playing misadventures in high school, and watched my  good friend Jason play a killer set of classic rock with his band at a charming hole in the wall called Dago’s.

I also spent plenty of time writing, editing and doing research for the book: I drove around dodgy neighborhoods soaking up atmosphere, logged in some time at the shooting range, interviewed a private detective, attended a lecture on street gangs, and took a road trip with my friend Styb to Jackson, Mississippi.

And on top of all that, I had a midlife … moment. I can’t call it a crisis, really, because nothing traumatic happened: I didn’t buy a ridiculous sports car, have an affair or dye my hair blue and start trying to fit in with a younger crowd.

So what did happen, exactly? Tell you what. Let’s save that for tomorrow.

3 Responses to How I spent my spring break