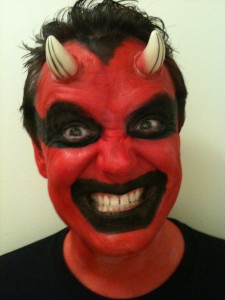 The demon in my skin. He knows my weaknesses ... especially fried chicken.

When you’re in your early forties (what’s that? I don’t look it? Oh, thanks! You’re so sweet) and you end up spending a couple of weeks sleeping in the same house you grew up in, and you encounter people you haven’t seen in literally twenty or twenty-five years, strange things happen. You drive home in the middle of the night and a Rush song comes on the radio as you’re tooling down West Esplanade and you could swear you’re in your old Tercel and it’s not 2011 but 1986. The world that was is overlaid over the world that is, so that the ghosts of past decisions linger outside every building, things left undone and unsaid pile up at the side of the road.

That’s how I felt, anyway, during an extended trip home to New Orleans back in March, as I started to recount in my previous post.

On top of that, I felt like an imposter—or, to be kinder, an actor playing a role (the prodigal son, briefly returning home) for which I felt horribly miscast. I’m blessed to know many people who love me unconditionally, and unlucky enough to play host to a demon in my own skin who relishes pointing out how unworthy I am of such affection, and takes a sadistic delight in whispering a litany of my many failures and shortcomings at every opportunity.

That demon is born of regret, and it’s regret on which he feeds. And on this trip, he did not go hungry. I spent nearly every waking moment suffering a powerful yearning to return to times that weren’t all that much fun the first time around. Like John Mayer, I wanted to run through the halls of my high school. I wanted to find the old Moreau Time Machine and call one long do-over on pretty much everything between the ages of thirteen and thirty-four. (Not the first time I’ve felt that way lately, as the above link attests.) I felt an almost intolerable compulsion to erase the blackboard of every acutely embarrassing grade-school interaction, every hyperactive freakout that caused the kids at John Quincy Adams Junior High to call me “Kevin Moron.”

My hands shook with the urge to go back and try out for softball and track, to practice harder on the clarinet, to treat the debate team more seriously. My entire being ached with longing for another take at all the schoolyard fights I lost, all the girls I was too excruciatingly shy and self-conscious to kiss or even talk to. I twitched so much I could hardly stay still, jonesing for the chance to go back and tell those long dead what they had meant to me, or to ace the classes I slept through or skipped out of because I was terminally bored and eternally angry and depressed and contemptuous of the people who didn’t understand or were simply jealous that I was destined for greatness, or weren’t as smart as I fancied myself to be.

I have two nephews, eighteen and fifteen, whom I love like my own sons. I watch them navigating the treacherous waterways of adolescence, and I see the older one turning his back on his education, and I want to shake them, my eyes wild like some crazy old innkeeper out of H.P. Lovecraft, and make them see. “You have no idea,” I tell them, “how much I’d give to be where you are now, to have it all to do over again, to do it right. To spare myself the years of unhappiness and struggling and working two jobs and second-guessing and having to scrabble with blunt, bloody fingers for everything I’ve got.”

Since I mentioned Rush earlier in this post, I like to joke that pretty much all of Neil Peart’s lyrics can be boiled down to one phrase: “Just Do It.” (All due apologies to Nike for appropriating their slogan.)

Put another way: “A man’s reach should exceed his grasp,” Robert Browning once wrote, “or what’s a heaven for?”

I’ve come to grips with the fact that I’ll never fire up the old time machine again. I’m not going to get to pop back to the ’80s, Doctor Who or Quantum Leap-style, and rewrite my own personal history. I can’t retroactively erase the pain, the heartaches, the setbacks and embarrassments lying in wait for Past Kevin. And that’s fine.

But there are some things I’d like to do for Future Kevin, and right now my reach is exceeding the hell out of my grasp, and heaven seems nowhere in sight. I’d like to get a full-time job. I want to get this book finished and published, and make at least enough money so that I can write another one. And I want to lose thirty pounds. I’m having to learn a whole new kind of patience as I sit here at my computer, or drive to the YMCA, and lay the groundwork for the life I want to have.

And that life feels so distant, so ephemeral, that the demon in my skin starts offering tempting alternatives: “Let’s blow off the writing and the resume-polishing and the freelance work and spend the day on the couch,” he says. “We’ll catch up on our reading and the current season of Justified, with a twelve-piece box of Popeyes chicken and a fifth of Jack Daniel’s finest whiskey for company.  Whaddaya say?”

When he comes, I close my eyes and play back that speech to my nephews. “Don’t waste what you’ve got,” I tell them, and myself. “What you do now matters. Today. This moment. It matters more than you can imagine.”

And just for good measure, I picture Neil drumming away, the Nike swoosh looming behind him, and tell myself those three little words.

5 Responses to Just do it