Saint that a shame 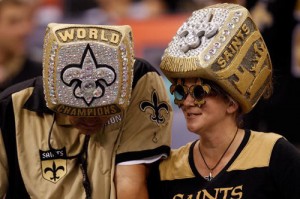 The New Orleans Saints warmed the hearts of underdog lovers everywhere with their thrilling victory over homeboy Peyton Manning and the Colts during Super Bowl XLIV. These days, however, they’re the talk of the sports world for a number of less-flattering reasons. Doubtless, the entire organization, to say nothing of its fan base, is pining for the halcyon days of 2010.

Thanks to an NFL investigation uncovering evidence of a “bounty” program that encouraged defensive players to injure opponents, Saints fans are experiencing stomach pains even worse than those suffered by viewers of Lindsay Lohan’s performance on Saturday Night Live last weekend. The notion of defensive players participating in a pool that allegedly paid cash rewards when opponents were taken out of a game or carted off the field would curdle the digestive system of any staunch football fan. But the effect is exponentially worse for Saints fans, who’ve endured a host of indignities, from the “Aints” to the Mike Ditka era, that would send Job stomping off muttering “Fuck this shit.”

That’s because these Saints were more than just Super Bowl champions. They were the city’s champions, fighting on behalf of a down-but-not-out populace still reeling from a dual walloping at the hands of Hurricane Katrina and a famously mishandled federal relief effort. For New Orleans, the 2009 Saints stood for something much larger than a game of violent millionaires. They stood for the hopes, the determination and the battered self-confidence of a city that had been knocked in the mud and stomped on by the very institution that was supposed to rescue it. These were heroes, and seldom had a group of people been more in need of heroes than the residents of New Orleans.

Today, Saints fans are left to wonder if this is the upshot of their hero worship: an organization embattled on all sides. Quarterback Drew Brees, whose large heart, philanthropic efforts and Herculean passing skills earned him a spot or two above Jesus in local hearts, gets slapped with the NFL’s franchise tag, allowing the Saints to keep him for another year while paying him far below the $23 million he’d been seeking. Surely Brees figures that having lead New Orleans to its only Super Bowl win should count for more than this. (To add insult to injury, he’s now facing criticism from former Saints loudmouth Kyle Turley, who’s questioning Brees’ integrity as a member of the NFL Players Association. That’s gotta smart.)

You can argue all you want that the negative attention focused on the Saints organization is unfair, that “everybody does it.” And you’d have a point. This is a game, after all, that emphasizes physical violence and glorifies the men who commit it. Certainly, NFL Commissioner Roger Goodell calls to mind Capt. Renault in Casablanca, sputtering “I’m shocked—shocked!—to find that gambling is going on in here!” as he raids Rick’s Café while pocketing his nightly winnings. Former Saints defensive coordinator Greg Williams apparently ran a similar bounty system with the Washington Redskins, and it’s possible that other teams he hasn’t been a part of have also taken part in such programs. There’s plenty of finger-pointing to go around.

But it doesn’t matter. The Saints are the first to have such a program exposed. And in the wake of the NFL’s recent rule changes in the name of protecting players from concussion, they’re going to be made an example. Williams will almost certainly be suspended, and Saints General Manager Mickey Loomis, who seems to have known about the program and done little to stop it, is likely to catch hell as well. Same goes for Coach Sean Payton, who rattled the community last year when his family packed their bags and loaded up the wagon for Dallas.

In the future, when we spot Payton standing on the sidelines in that familiar arms-crossed stance, we’ll have cause to speculate whether that Donald-Trump-undergoing-a-colonoscopy smirk into which his features are perpetually twisted is the product of a bad burrito, or the knowledge that he helped tarnish the goodwill of a team more beloved by its fans than just about any other in the history of the game.

2 Responses to Saint that a shame